SOURCE ONE:
At Karnak: Nefertari  is shown at the Festival of the Mast of Amun-Min-Kamephis. The king and queen are said to worship in the new temple and are depicted watching over the Erection of the Mast before Amun-Re attended by standard bearers.
Nefertari’s speech during the ceremony is inscribed:


"Your beloved son, the Lord of Both Lands, Usermaatre Setepenre, has come to see you in your beautiful manifestation. He has erected for you the mast of the (pavilion)-framework. May you grant him eternity as King, and victory over those rebellious (against) His Majesty, L.P.H." - (Kitchen, K.A. 1996, Ramesside Inscriptions, Translated, Annotated, Translations Volume II, Blackwell Publishers)

Cuneiform tablets from the Hittite city of Hattusas show Nefertari’s prominence at court as it contains her letters from the King Hattusili III and his wife Pudukhepa. She is referred to as ‘Naptera’ and is known to have sent gifts to Pudukhepa.

“The great Queen Naptera of the land of Egypt speaks thus: Speak to my sister Puduhepa, the Great Queen of the Hatti land. I, your sister, (also) be well!! May your country be well. Now, I have learned that you, my sister, have written to me asking after my health. ... You have written to me because of the good friendship and brotherly relationship between your brother, the king of Egypt, The Great and the Storm God will bring about peace, and he will make the brotherly relationship between the Egptian king, the Great King, and his brother, the Hatti King, the Great King, last forever... See, I have sent you a gift, in order to greet you, my sister... for your neck (a necklace) of pure gold, composed of 12 bands and weighing 88 shekels, coloured linen maklalu-material, for one royal dress for the king... A total of 12 linen garments” – (Tyldesley, Joyce. Chronicle of the Queens of Egypt. Thames & Hudson. 2006), (Kitchen, K. A., Pharaoh Triumphant: The Life and Times of Ramesses II, The King of Egypt, Aris & Phillips. 1983)

SOURCE THREE:
Queen Nefertari playing senet, a board game played by all levels of society, depicted in a relief from her tomb in the Valley of Queens (QV66). 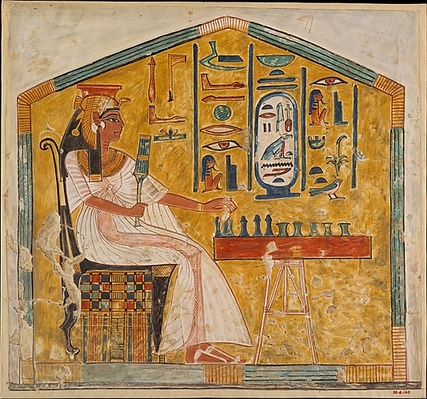 Abu Simbel, Small Temple: this was dedicated to both Nefertari and the goddess Hathor. Dedication text:

This text is indicative of Ramesses II's immense love for his wife, Nefertari and thus explains her significance in the Nineteenth Dynasty. 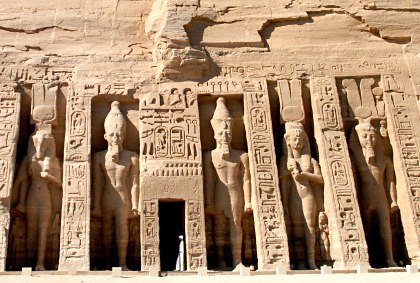 The larger temple at Abu Simbel that was solely dedicated to Nefertari.
Outside the temple, there is a stature of Ramesses II and beside him, in a smaller size, Nefertari appears twice. Inside the temple she is shown on one of the pillars in the great pillared hall worshipping Hathor of Ibshek. She is also shown standing behind Ramesses II on the wall of the inner pillared hall which symbolises she was still inferior to him, however, important enough to have a temple dedicated to her. Ramesses and Nefertari are also depictied standing before the barque of Amun and she is shown playing the sistra.  Nefertari is shown twice accompanying her husband in triumph scenes as well as before a barque dedicated to a deified Ramesses II. (Tyldesley, Joyce. Chronicle of the Queens of Egypt. Thames & Hudson. 2006), (Kitchen, K.A. 1996, Ramesside Inscriptions, Translated, Annotated, Translations Volume II, Blackwell Publishers)
Powered by